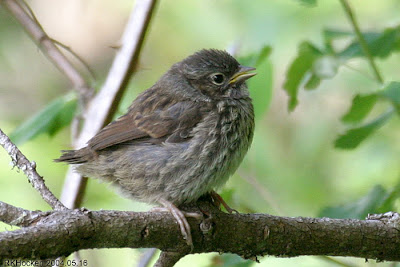 Saturday January 16:
A Northern Goshawk was spotted flying across the Englishman River in Parksville.

A Northern Harrier was seen flying low over the Englishman River Estuary in Parksville.

A male Anna's Hummingbird was seen in courtship behavior over a little marsh behind Longwood Station in north Nanaimo. He would climb to about 35 feet in altitude, pause, then dive and give a loud 'ping' call as he ended the descent. He then rose to about 15 feet and hovered while calling three repeats of the typical 'zinc-zinc' call. He repeated this about a half dozen times.

A White-throated Sparrow, five Golden-crowned, a Northern Harrier, a Short-eared Owl and a Sharp-shinned Hawk were seen at the Nanaimo River Estuary in south Nanaimo.

Over seventy Dark-eyed Juncos, several pairs of Anna's Hummingbirds (the females are gathering nesting material in the area) and a Varied Thrush are visiting feeders along Hammond Bay Road in Nanaimo.

A flock of about 40 Trumpeter Swans flew east along the Millstone River, over Buttertubs Marsh, and disappeared, going towards Gabriola Island.

Friday January 15:
A Rufous Hummingbird was spotted in the 600 block of Beaconsfield Road in Nanaimo.

Thursday January 14:
Three American Tree Sparrows were seen along the hedgerow to the right of the Oak tree at the Nanaimo River Estuary in south Nanaimo.

Wednesday January 13:
A large flock of Pine Siskins and eighteen House and Purple Finch were seen in a back yard along Dawkins Lane in Nanaimo.

Tuesday January 12:
The Tuesday Bird Walk went to the Shelley Road side of the Englishman River Estuary in Parksville. The 12º morning was partly cloudy with calm winds--a great morning to be birding.
The highlights of the morning included seeing a Peregrine Falcon looking down at us from a high perch on a snag as he preened himself. As we watched, he was joined by another Peregrine Falcon on a nearby snag. We spotted four mature Bald Eagles along the Estuary. A Sharp-shinned Hawk flew to a perch high up in a Fir Tree. A Red-tailed Hawk was perched on a snag overlooking the Estuary. A small flock of Golden-crowned Kinglets and Ruby-crowned Kinglets gave us spectacular views as they gleaned insects from some low small shrubs about four feet from us.
A Merlin made a quick appearance, while we doing the tally at the end of the walk, making the total predators of the morning five.
Eleven birders saw and heard the following forty-three species of birds:
Canada Goose, Trumpeter Swan, American Wigeon, Mallard, Northern Pintail,
Greater Scaup, Bufflehead, Common Goldeneye, Hooded Merganser, Common Merganser, Red-breasted Merganser, Pacific Loon, Pelagic Cormorant, Great Blue Heron, Bald Eagle, Sharp-shinned Hawk, Red-tailed Hawk, Merlin, Peregrine Falcon,
Black Turnstone, Mew Gull, Glaucous-winged Gull, Belted Kingfisher, Downy Woodpecker, Northern Flicker, Northwestern Crow, Common Raven ,
Chestnut-backed Chickadee, Bushtit, Red-breasted Nuthatch, Brown Creeper,
Bewick's Wren, Winter Wren, Golden-crowned Kinglet, Ruby-crowned Kinglet,
American Robin, Cedar Waxwing, Spotted Towhee, Song Sparrow, Dark-eyed Junco, Purple Finch, Red Crossbill and Pine Siskin.

Sunday January 10:
A Cooper’s Hawk and a Downy Woodpecker were seen at Buttertub’s Marsh in Nanaimo.

I recently came accross your blog and have been reading along. I thought I would leave my first comment. I dont know what to say except that I have enjoyed reading. Nice blog. I will keep visiting this blog very often.