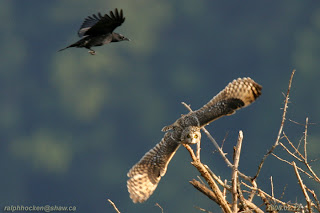 
The White Wagtail was seen again today, as well as photographed at the same location in Courtaney as reported on Wednesday November 14.


Saturday, November 17:
A Varied Thrush was seen eating the berries off  Mountain Ash Tree in the 200 block of Dawkins Lane in Nanaimo.


Thursday, November 15:
A Snowy Owl was seen sitting on a house along Orchard Circle in north Nanaimo.


First we went down to the Courtenay Estuary. Going along the Comox Courtenay road from Courtenay we stopped at the sewage pumping station parking lot, on the right hand side. Directly across the road is a dirt farm road heading north thru the trees, with a large 'For Sale' sign posted. Up this farm road 100 meters there is a steel cable blocking vehicle access. Going under this we noticed an unusual gray and white medium sized bird bobbing its very long tail (With white outer tail feathers) Walking around in the mud and grass catching insects on the left hand side, just passed a small pond. It was quite tame and allowed us to get within 10 meters of it in excellent sunny/light conditions. The field marks and 'G.I.S.S.'suggests this was a first year bird.


It did fly, in an undulating flight (Woodpecker style) and gave out a distinctive call, a very sharp loud descending buzz. We stayed around for a while and it returned to its original feeding spot while we watched it for over half a hour.


Having experienced the Wagtail species in Sussex, England, and fifty years ago! It was great to see this type of bird once again in Canada. A good V.I.'life bird for both of us.


A Northern Shrike was spotted sitting on a fence along Magnolia Drive in the Maple Glen area of Parksville.


A Snowy Owl was seen sitting on a house roof along Thalia Place above the Vancouver Island University in Nanaimo.


Several White-crowned Sparrows were hanging about the feeders in a backyard in upper Lantzville.