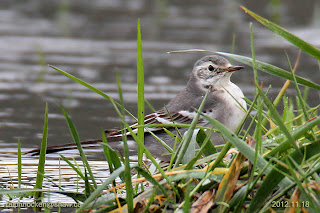 Citrine Wagtail: Ralph Hocken Photo.
I had the good fortune to go up to Courtenay this morning with Colin in search of the Citrine Wagtail. We arrived at the site at about 10:15 A.M. The birders there had seen the Wagtail at about 9:30 A.M. We spent the next two and a half hours scanning the edge of the field and looking for the bird with out any luck. Two Peregrine Falcons flew over, raising the Gulls and landed in the trees near the entrance to the field, and after a bit the Falcons left the area. Large numbers of Trumpeter Swans flew low over us for most of the morning. A flock of sixty Greater White-fronted Geese circled low over us and went to the field with the Swans near Comox Road.
Mike Yip and three birders from the Sunshine Coast and a birder from Comox also searched for the Wagtail, at about one o’clock Mike waved to us to come and we headed towards the brush piles and turned right onto a pair of planks to the right side of the field and there was the Citrine Wagtail.
We spent the next hour following the bird as it fed along the tall grass and out in the muddy field moving all the time. It flew up onto a brush just off the edge of the field and started to preen if self and a Dark-eyed Junco was preening itself just below the Wagtail. As I looked through the scope at fifty power I watched the Wagtail preen and finally got back to the field and feed. The sighting was just spectacular through the scope, up close and personal.
We saw the following twenty-five species:
Citrine Wagtail
Spotted Towhee
Golden-crowned Sparrow
Song Sparrow
Fox Sparrow
Dark-eyed Junco
Northwestern Crow
Common Raven
Mew Gull
Northern Flicker
Belted Kingfisher
Eurasian Collared-Dove
Glaucous-winged Gull
Bald Eagle
Greater White-fronted Goose
Trumpeter Swan
Lincoln's Sparrow
Pine Siskin
House Finch
Peregrine Falcon
Northern Shrike
Killdeer
Northern Harrier
Purple Finch
Red-tailed Hawk
Good birding
Neil Robins
Parksville
British Columbia