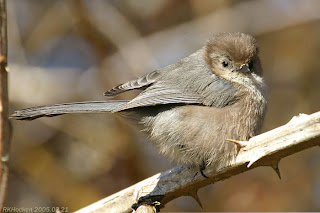 NANAIMO BIRD REPORT -----” GO BIRDING--EXPLORE NATURE”
To report your sightings phone the Store at 250-390-3669 or e-mail us at thebackyard@shaw.ca
Please remember, when reporting a sighting, to leave your name and phone number along with the date, the species and location of your sighting.
Sunday, April 07, 2013:
The Sunday bird walk went to Buttertubs Marsh in Nanaimo
The morning was cloudy with a strong wind blowing throughout the morning.  A large flock Violet-green Swallows, Tree Swallows, a Northern Rough-winged Swallow and a Barn Swallow were hawking insects just above the marsh at the start of the walk. We spotted two Bushtits busy  building a nest above the trail. A Yellow-rumped Warbler and a Common Yellow-throat  were seen near the trail.  Marsh and Bewick’s Wrens were singing their songs during the morning.

Three Townsend's Solitaires, a Sharp-shinned Hawk and a large number of  Orange-crowned Warblers were seen along the power line right of way in the Harwood area of Nanaimo.