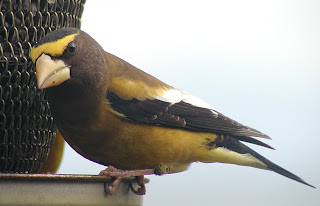 Sunday, April 14, 2013:
The Sunday bird walk went to Morrell Sanctuary in Nanaimo.  The morning was mostly cloudy with a few sunny periods. We watched a pair of Brown Creepers building a nest under the bark of a tree.  Four Evening Grosbeaks were feeding on the Maple Tree buds giving us great views. We heard a Hutton’s Vireo and Pacific Wrens singing during the morning.
Seventeen birders including visiting birders from Calgary and Wisconsin saw and heard the following thirty-one species:


A Mountain Bluebird, fourteen Greater Yellowlegs, a Lesser Yellowlegs, a Western Meadowlark and a Northern Harrier were seen at the Nanaimo River Estuary in south Nanaimo.


Saturday, April 13:
ATownsend’s Solitaire and a Wilson’s Snipe were seen on the Shelly Road side of the Englishman River in Parksville.


Friday, April 12:
A Chipping Sparrow was visiting a backyard feeder along Meridian Way in Parksville.


Monday, April 08:
A Black Headed Grosbeak was seen in a yard along Parkview Avenue in Parksville.