To report your sightings phone the Store at 250-390-3669 or e-mail us at thebackyard@shaw.ca  Please remember, when reporting a sighting, to leave your name and phone number along with the date, the species and location of your sighting.

Sunday, April 21, 2013:
The Sunday bird walk went to Nanaimo River Estuary in south in Nanaimo.  The morning was windy and cloudy with a few sunny periods. We had great looks at a Lapland Longspur feeding in the tall grasses on the estuary. One Lesser Yellowlegs and twenty Greater Yellowlegs were feeding along the gravel bar on the river. A Short-eared Owl was spotted on the ground not far from us. A Northern Shrike was perched in a bush on the estuary. A flock of over sixty Greater White-fronted Geese flew high overhead heading north. 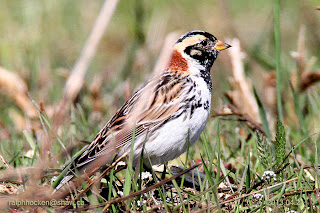 
Wednesday, April 17:
A Lapland Longspur was seen at the Nanaimo River Estuary in south Nanaimo.

Tuesday, April 16:
The Tuesday bird walk went to Springwood Park in Parksville. The morning was sunny and warm. We saw and heard several Orange-crowned Warblers throughout the morning.  A Common Yellowthroat entertained us from a perch on some Scotch broom next to the road giving us great views.  An American Kestrel was perched in a tree along the farmer’s field. We spotted a Great Horned Owl with a fledgling as well as two pairs of Townsend's Warblers on the way back to the parking area to finish off a great morning of birding. 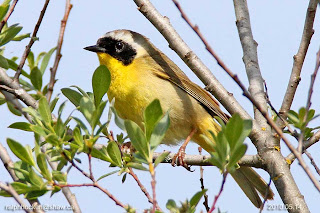 
An Osprey was seen heading south on Highway 19 coming from Harewood Mines Road in Nanaimo.

The Tuesday bird walk on April 23, will be going to the Little Qualicum River Hatchery. We will meet at Parksville Bay next to the Lions Playground at 9:00 a.m. or at the viewing platform in north Qualicum Beach near Garrett Road at about 9:15 a.m.