“EXPLORE NATURE”---GO BIRDING:
To report your sightings phone the Store at 250-390-3669 or e-mail us at
thebackyard@shaw.ca
Please remember, when reporting a sighting, to leave your name and phone
number along with the date, the species and location of your sighting.
********************************************************************
Sunday, December 20, 2015
The Sunday bird walk went to Buttertubs Marsh. The morning was mostly sunny with a few clouds and the wind was calm. A large flock of Ring-necked Ducks were seen on the marsh. We spotted a Barred Owl perched next to the trail giving us great views. A Ruby-crowned Kinglet kept us entertained feeding just off the trail. At the top of a tall tree we saw a young Northern Shrike, the Shrike did not have his mask yet but was very light coloured and looked us over before flying off. 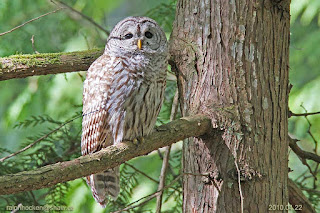 
Saturday, December 19:
“RBA-REDWING”
A Redwing as in Eurasian thrush was seen in trees near 3940 S. Valley drive in Victoria.


Evening Grosbeaks were seen near Townsite Road and Graham Road in Nanaimo.
Tuesday, December 15:
The Tuesday bird walk went to Rathtrevor Beach Provincial Park in Parksville. The morning started with light rain and calm winds but the rain stopped after a short while and we had a pleasant morning for the walk. Several flocks of Brant Geese flew past during the morning. We discovered a mixed flock of Black Turnstones and six Surfbird feeding along the shoreline at the point. Several Common Murre, two Marbled Murrelets, two Long-tailed Ducks and a Pigeon Guillemot were seen further off shore giving us good views. 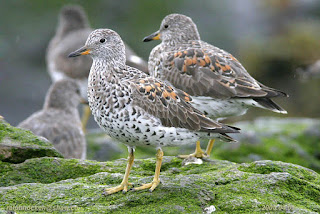 
The Tuesday bird walk on December 22 will be going to the Plummer Road side of the Englishman River Estuary in Parksville. Meet at the Parksville Community Park, near the Lions Club Kids Playground at 9:00 a.m. or at the corner of Plummer Road and Shorewood Drive at about 9:10 a.m.