The Tuesday bird walk went to the North Entrance to the Englishman River Estuary off of Mills Road in Parksville. The morning was cloudy with sunny periods and the winds were calm. The highlight of the morning was the sighting of a Common Redpoll perched on top of a tall Cedar Tree not far from the viewing platform. The Redpoll stayed on it’s perch for a long period of time, looking in all directions, and giving us great views!  We saw a female Pine Grosbeak feeding along the Corfield Trail. Ten Western Meadowlarks were perched in a tall deciduous tree near the edge of the estuary on the Community Park side.  A Northern Shrike was also perched in the same area.  We saw a large number of Northern Flickers throughout the morning.    Flocks of Brant and Long-tail Ducks flew up the Strait of Georgia. 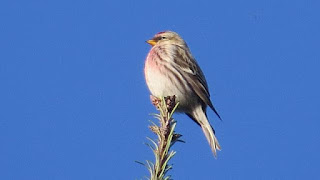 Common Redpoll at the top of a Cedar Tree: Len Bettam Photo.


The Tuesday bird walk on January 05, 2016 will be going to Deep Bay. Meet at the Parksville Community Park at the parking lot near the Lions Club Kids playground at 9:00 a.m. or at the parking lot at the Deep Bay Marina at about 9:35 a.m.