Sunday, May 08, 2016:
The Sunday bird walk went to Neck Point Park in Nanaimo. The morning was mostly sunny with very strong winds off the Strait of Georgia.  A Wilson’s Warbler entertained us with his song for the longest time near the parking lot and he did appear in the open for us to have a short glimpse.  A MacGillivray’s Warbler and a Warbling Vireo were seen in the same area.  Two Savannah Sparrows were feeding along the shoreline.  A Red-necked Grebe was spotted just off shore.  Two Black Oystercatchers flew along the shoreline, singing all the way. 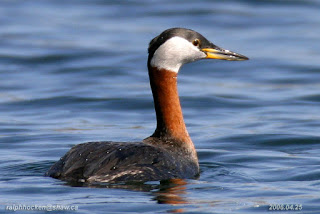 
Thursday, May 05:
A Black-headed Grosbeak was seen along Morrell Circle in Nanaimo.


Seven Evening Grosbeaks were seen at the backyard feeders along Meridian Way in Parksville.


Tuesday, May 03:
The Tuesday bird walk met at the Brant viewing platform in Qualicum Beach and went on to the Little Qualicum River Fish Hatchery. The morning was cloudy with light rain showers but calm winds. One Bonaparte's Gull, seven Pacific Loons and one Common Loon were in their very colorful breeding plumage not far from shore at the viewing platform.  An American Dipper was gathering nesting material and going under the bridge at the Hatchery. We had great views of a Pacific-slope Flycatcher perched  and singing at the top of a tall conifer tree. We heard and then saw a Red-breasted Sapsucker close to the trail.  We first heard a Warbling Vireo singing and after much searching we spotted the Vireo close to the trail.  A Western Tanager, a Hammond’s Flycatcher, a Yellow-rumped Warbler, a Wilson’s Warbler and a Common Yellowthroat as well as several  Black-throated Gray Warblers and Orange-crowned Warblers were heard during the morning. There were a large number of Chipping Sparrows seen throughout the morning. 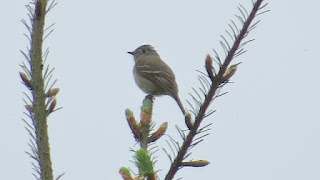 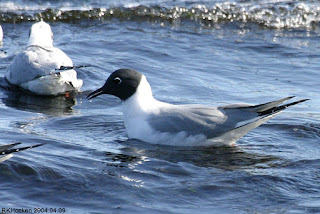 
Monday, May 02:
A Western Wood-pewee was spotted in the trees atop Colbourne Drive in the Brook Wood area of Nanaimo.


The Sunday bird walk on May 15, 2016 will be going to the Beaver  Ponds in Nanoose Bay.  Meet at the Birdstore at 9:00 a.m. or follow Highway 19 to Northwest Bay Road.  Take Northwest Bay  Road to Power Point Road and turn right onto Power Point Road.  Go to the four-way stop and proceed about one hundred meters past it to the parking area on the left hand side, at about 9:30 a.m.