The Tuesday bird walk met at the Brant viewing platform in Qualicum Beach and went on to the Little Qualicum River Fish Hatchery. The morning was cloudy with light rain showers but calm winds. One Bonaparte's Gull, seven Pacific Loons and one Common Loon were in their very colorful breeding plumage not far from shore at the viewing platform.  An American Dipper was gathering nesting material and going under the bridge at the Hatchery. We had great views of a Pacific-slope Flycatcher perched  and singing at the top of a tall conifer tree. We heard and then saw a Red-breasted Sapsucker close to the trail.  We first heard a Warbling Vireo singing and after much searching we spotted the Vireo close to the trail.  A Western Tanager, a Hammond’s Flycatcher, a Yellow-rumped Warbler, a Wilson’s Warbler and a Common Yellowthroat as well as several  Black-throated Gray Warblers and Orange-crowned Warblers were heard during the morning. There were a large number of Chipping Sparrows seen throughout the morning. 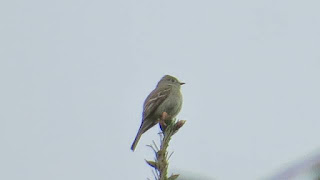 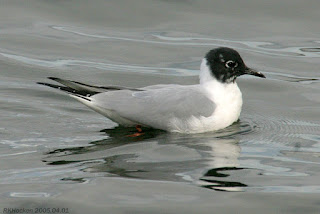