Friday, May 13:
A Swainson’s Thrush was seen at Nanoose Bay.


A Western Tanager was seen in Lower Lantzville and one was also seen on Gabriola Island.


Saturday, May 14:
Blue-wing Teal, Greater and Lesser Yellowlegs along with Long-billed and Short-billed Dowitchers were seen at Quennell Lake in Cedar.


Four Whimbrel were seen at Pipers Lagoon in Nanaimo


A Yellow-headed Blackbird is visiting feeders along Gomerich Road in Nanaimo. 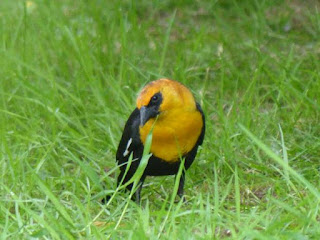 
Tuesday, May 10:
The Tuesday bird walk went to the Plummer Road side of the Englishman River Estuary in Parksville. The morning was sunny and warm with calm winds. A Common Yellowthroat was singing from the top of a bush just across the river. A mixed flock of a Semipalmated Plover, a Pectoral Sandpiper,a Black-bellied Plover, a Dunlin and two Killdeer, several Western Sandpipers and a few Least Sandpipers greeted us along the mudflats and kept us entertained for a good part of the morning.  We heard a Pacific-slope Flycatcher, Orange-crowned Warblers, a Yellow Warbler and a Wilson's Warbler singing during the walk. Two immature Bald Eagles were seen chasing a Glaucous-winged Gull overhead before giving up the chase and flying away. 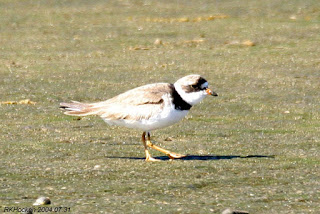