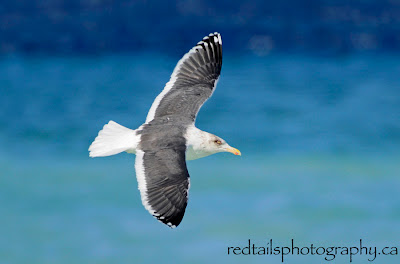 Sunday March 15, 2009:
Evening Grosbeaks were seen in the 500 block of Temple Street in Parksville.

Saturday March 14:
A Barred Owl was seen along Stewart Avenue and at Sharman Park off Metral Drive in Nanaimo.

Friday March 13:
A Cooper's Hawk was spotted chasing a Golden-crown Sparrow in the 2500 block of Glenayr Drive in Nanaimo.

A first winter Iceland Gull was seen in with the other gulls on the High School playing fields in Duncan.

Thursday March 12:
A Varied Thrush was spotted in yard along View Street in south Nanaimo.

Wednesday March 11:
An Anna's Hummingbird was feeding on winter jasmine in the 2500 block of Glenayr Drive in Nanaimo.

A hugh raft (about one Kilometer long) of Seabirds was seen off Qualicum Bay,

Monday March 09:
California, Glaucous-winged, Glaucous, Thayer's and Mew Gulls by the thousands were seen at Parksville Bay Community Park in Parksville. Near the shore at Parksville Bay, there were also over 1000 Brant feeding on the spawn and lifting each time a Bald Eagle came over the area.

A Cooper's Hawk was spotted at the end of Jinglepot Road in Nanaimo.

Twelve Orcas (Killer Whales) were seen off shore at Neck Point in Nanaimo.