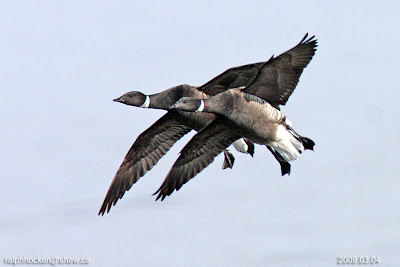 
The Tuesday Bird Walk went to Parksville Bay in Parksville. The morning was cloudy and the winds turned quite strong as the morning progressed. Twenty birders saw and heard thirty-three species of birds.
Among the highlights of the morning were about 2000 Brant Geese feeding in the Bay. Further out there were huge rafts of Greater Scaup, Surf Scoters, Bufflehead, Common
Goldeneye and Long-tailed Ducks. There were Northern Pintail Ducks, two Eurasian Wigeon and one Gadwall among the American Wigeon near the gravel bar. A flock of Dunlin flew onto a smaller gravel bar with one Black-bellied Plover and two Black Oystercatchers. A Bald Eagle passed over the gravel bar and the Ducks, Geese and Gulls lifted creating a spectacular sight and unforgettable sound.