The Tuesday bird walk went to the Little Qualicum River Estuary in Qualicum Beach. The morning was cloudy with calm winds and fairly warm for this time of the year.  We spotted a Western Gull feeding on the rocky shore.  Black-bellied Plovers, Dunlin, Black Oystercatchers and Black Turnstones were seen along the gravel bar.  Thirty Ancient Murrelets were seen offshore at the viewing platform. Over one hundred Black Scoters were singing just offshore at the “A” frame house near the estuary.  Hundreds of Pacific Loons and several Common Loons were seen far offshore.  A Eurasian Widgeon was seen feeding with the American Widgeon in the estuary.  Thirty-six Trumpeter Swans were swimming in the fresh water as it entered the salt water at the estuary.  At the end of the walk we spotted one Long-tailed Duck flying down the Strait of Georgia. 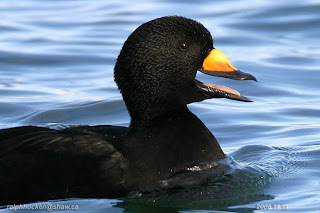 
The Tuesday bird walk on January 07, 2014 will be going to Columbia Beach. 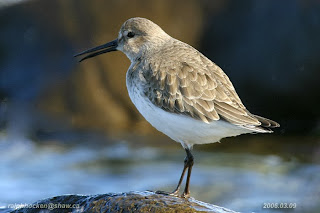